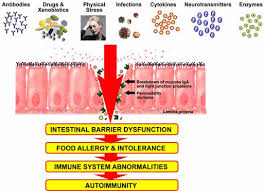 Why do we have to boost the metabolism and/or feed our systems larger-than-normal amounts of vitamins, minerals, amino acids, etc?

Because, it would seem, we're compensating for a leaky gut. Despite the research which shows that increased intestinal permeability problems are the cause of or complicates the lives of people with asthma, rheumatoid arthritis, IBS, and/or AIDS, we seem to think our intestines are made of steel.

Any one of the following can cause a leaky gut:

In addition to the creation of food allergies by the leaky gut, the bloodstream is invaded by bacteria, fungi and parasites that, in the healthy state, would not penetrate the protective barrier of the gut. These microbes and their toxins, if present in large enough amounts, can overwhelm the liver's ability to detoxify. This results in symptoms such as confusion, memory loss, brain fog or facial swelling when the individual is exposed to a perfume or to cigarette smoke that he or she had no adverse reactions to prior to the development of the leaky gut syndrome.

Leaky gut syndrome also creates a long list of mineral deficiencies because the various carrier proteins present in the gastrointestinal tract that are needed to transport minerals from the intestine to the blood are damaged by the inflammation process. For example, magnesium deficiency (low red blood cell magnesium) is quite a common finding in conditions like fibromyalgia despite a high magnesium intake through the diet and supplementation. If the carrier protein for magnesium is damaged, magnesium deficiency develops as a result of malabsorption. Muscle pain and spasms can occur as a result. Similarly, zinc deficiency due to malabsorption can result in hair loss or baldness as occurs in alopecia areata. Copper deficiency can occur in an identical way leading to high blood cholesterol levels and osteoarthritis. Further, bone problems develop as a result of the malabsorption of calcium, boron, silicon and manganese. (from the web page of Dr. Zoltan Rona, Toronto, Ontario).

Enzymes deficiency, irritants such as alcohol and drugs, chemical preservatives, food allergies and toxins create inflammation and contribute to the Leaky Gut Syndrome. Nutrients are not properly absorbed, creating nutritional deficiencies. Food particles that normally do not pass through the intestinal tract leak into the bloodstream creating toxic and allergic reactions. Antibodies (the body's defense team) attack these invaders as if they were infections but are unable to kill food particles. These food particles may look like the body's natural enemies (antigens) on tissue. In its exuberance, the immune system can attack joints as in arthritis; collagen and skin as in lupus; the nerve sheath known as MS or multiple sclerosis; or muscles as in fibromyalgia. Irritable bowel, with constipation, diarrhea, abdominal bloating and swollen extremities, can result from leaky gut syndrome.